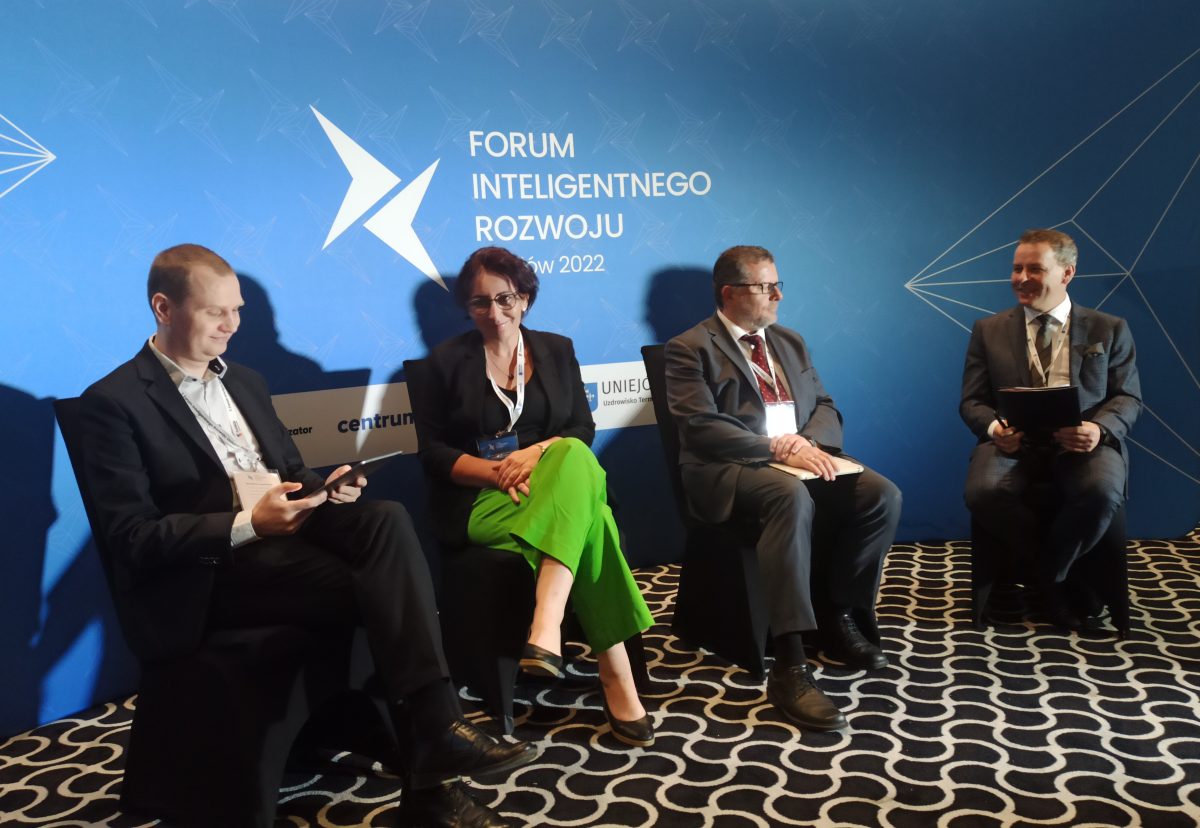 The discussions focused on digital transformation, its benefits for the Polish economy and the cybersecurity challenges it entails. The attendees debated modern IT technologies, advanced systems, cloud computing and algorithms used for complex analysis and prediction.

Dr Protasiewicz emphasised the importance of artificial intelligence (AI) in various industries and explained its benefits in business. AI is not the future; it is already here. In Poland, many firms are already using the technology to their advantage. The Polish government has set the ambitious goal of including the nation in a rarefied group of 20–25 countries that excel at creating AI.

Dr Protasiewicz presented tools that had been developed by experts at OPI PIB and explained how they could be used in business. They included a system that detects depression symptoms on social media. The system was awarded first prize in Detecting Signs of Depression from Social Media Text, a competition organised in Dublin, Ireland. The solution is based on the RoBERTa neural language models. In addition to utilising a standard model for the English language, the system was trained with using OPI PIB’s own model. It includes approximately 400,000 posts, which mainly concern depression, anxiety disorders and suicidal thoughts. Combining the two models yielded the best results. Dr Protasiewicz then presented Annobot: a platform that assists in the development of systems that detect emotions in text. The innovative tool is used to tag and create datasets via conversations with a chatbot.

Dr Protasiewicz also provided a brief overview of a system that is currently being developed by OPI PIB for the Polish Office of Competition and Consumer Protection (UOKiK). The tool will help UOKiK to detect illegal clauses in agreements easily and rapidly. The application will rely on AI technology, which can quickly and efficiently scan template agreements that are available on the internet or have been submitted by consumers, and report any issues to UOKiK.

During the meeting, Dr Protasiewicz answered the questions of the panel moderator on the Internet of Things (IoT) and changes in education triggered by new technologies. OPI PIB experts highlighted the impact of the COVID-19 pandemic, and also mentioned lifelong learning—a popular idea in the West that has found many proponents in Poland. Poles are beginning to realise that the knowledge they acquired at school and university is insufficient in a modern, dynamically changing world. The development of the internet has changed people’s habits considerably. This, in turn, has prompted the evolution of remote teaching. Poles crave reliable data and up-to-date educational content. This explains the popularity of NAVOICA: a website that offers a plethora of free online courses prepared by Polish universities and higher education institutions (which ensures the quality of the materials). Other participants of the panel included: Dr Zygmunt Krasiński, Chairman of the Polish Chamber of Commerce for High Technology and strategic advisor to the Head of the National Centre for Research and Development and Agnieszka Łasut, cofounder and Chairperson of Smart Secure Networks Sp. z o.o., Polski Klaster Iot & AI SINOTAIC. The discussion was moderated by Mariusz Kulma, programmer, designer, application and game developer, owner of Apogee Games and publisher of Astronomia monthly.