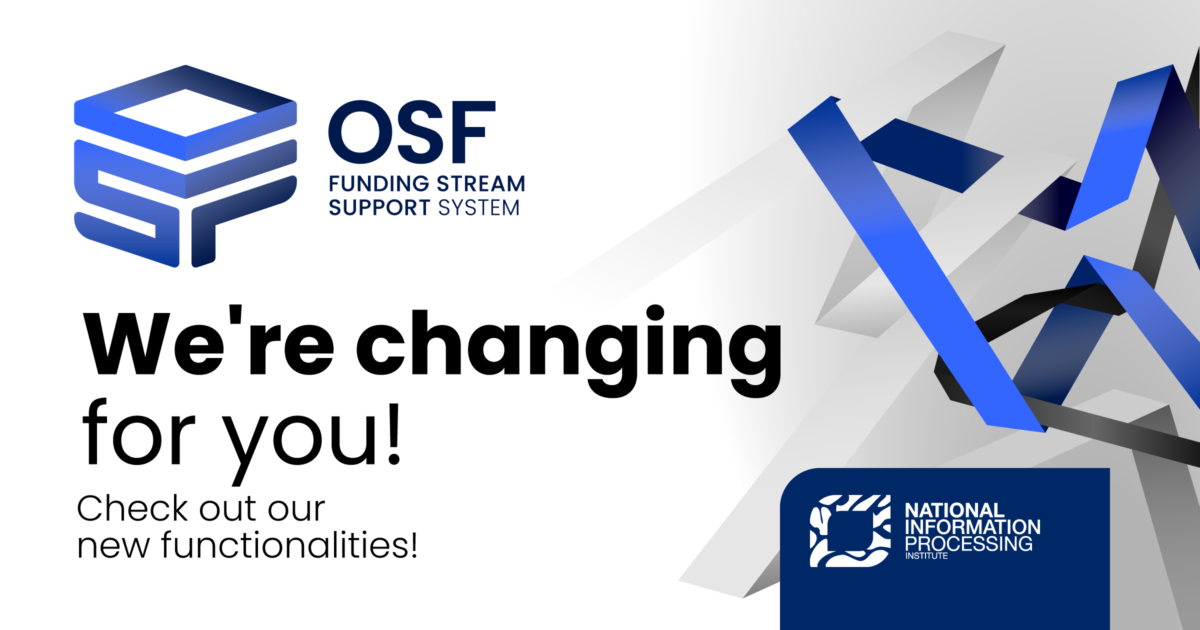 On 14 March, 2022, the National Information Processing Institute (OPI PIB) launched a new version of the Funding Stream Support System (OSF). The system has undergone various modifications to better meet the expectations of its users. OPI PIB has updated the look of the system, enhanced its security, and added new functionalities—including support for website editors and a news database. More changes will be implemented by the end of 2022.

An intuitive interface and user support

OSF is the oldest tool that continues to be maintained and developed by OPI PIB. Work on OSF began in 2005, the first code commit taking place on 29 June of the same year. Its architect, Dr Jarosław Protasiewicz, is currently the Head of OPI PIB.

‘I have to admit that I’m fond of OSF. I was the first programmer that was responsible for its implementation. Those were different times: the technology we had at our disposal back then was far from what you could call advanced. The OSF system we have today is almost entirely different from the one we had in 2005; it has evolved massively. Our specialists at the Laboratory of Business Systems have introduced a host of new functionalities. I’m glad that despite many years having passed, OSF is still playing an important role and is still being used to implement innovations based on scientific achievements,‘ says Dr Protasiewicz.

The changes introduced in March are immediately recognisable. Experts at OPI PIB have entirely redesigned the home page. An updated design, a revamped logotype, and a user-friendly interface are just a few of the new features. Users have also gained access to an FAQ section. The knowledge base and the news modules have been considerably extended and improved. Users cannot miss any competition they might be interested in and will be provided with all of the latest information on competition deadlines and the requirements their applications must meet to be completed. System developers at OPI PIB are committed to enhancing the tool continually to meet users’ needs and expectations. To attain this goal, they have launched a survey system that is designed to gather the information necessary for the future development of OSF. Work that focuses on enhancing the website design and introducing new functionalities is scheduled to be completed by the end of 2022.

‘Today, security issues are of paramount importance. Cyberattacks on all kinds of institutions and companies are becoming more common. Data leaks are a serious problem. For these reasons, it is important that appropriate security standards are implemented. By introducing new modifications to OSF, we have enhanced the security and functionality of the system. We have conducted an expert audit and appointed a team responsible for ensuring compliance with the Web Content Accessibility Guidelines (WCAG). We are also working on improving the capabilities of the electronic signature validator and on two-factor authentication based on the OPI PIB Central Logging Module. We are doing everything we can to make OSF a safe, modern and innovative tool. That is why we are introducing new technologies and switching to a distributed architecture model,‘ says Przemysław Zydroń, Head of the Laboratory of Business Systems at OPI PIB. The OSF system has been in continuous development since 2005. It facilitates the submission of grant applications and streamlines the R&D funding process. In addition to being responsible for the development and administration of the system, experts at OPI PIB also provide user support. OSF supports grant competitions organised by three institutions: the Polish Ministry of Education and Science, the Polish National Science Centre, and the Polish National Centre for Research and Development. Each year, OSF supports the transfer of over PLN 3 million to Polish researchers and entrepreneurs.