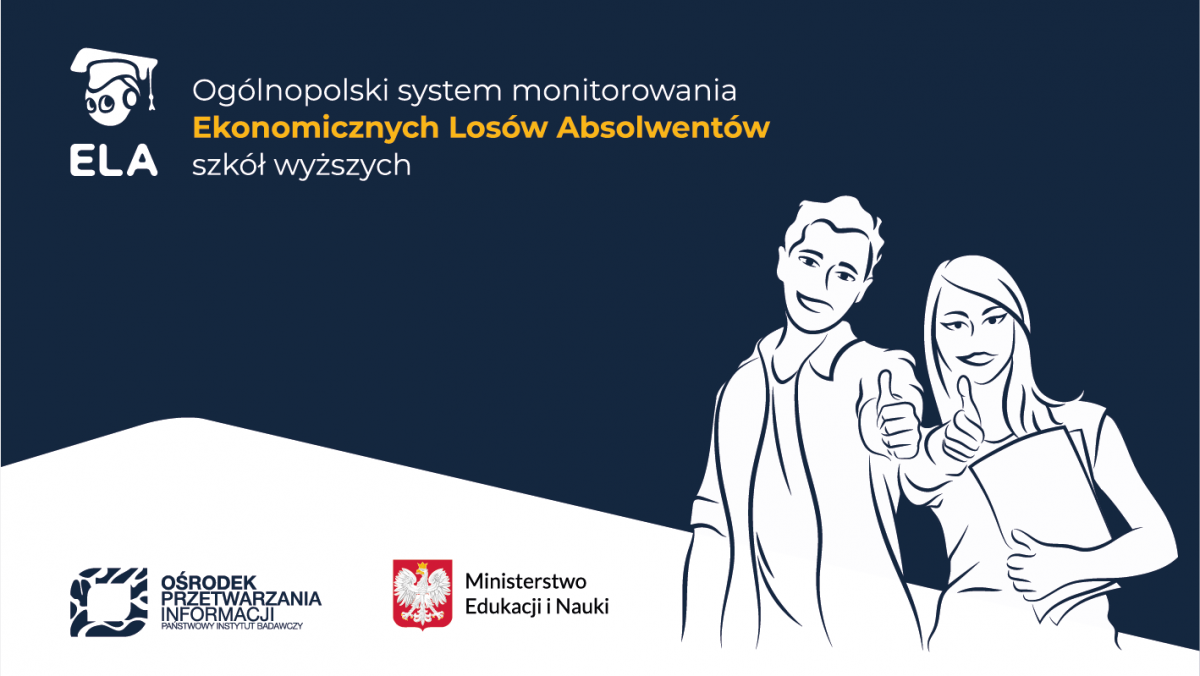 On 5 July, the Polish Ministry of Education and Science announced the results of the high school leaving exams of 2021. Today, the National Information Processing Institute (OPI PIB) launched a new edition of the Polish Graduate Tracking System (ELA), which was commissioned by the Ministry of Education and Science. New data confirms that studying at higher education institutions pays off; regardless of graduation year, graduates’ earnings in consecutive years following graduation are growing faster than those in their places of residence. The data published in the sixth edition of ELA shows that the COVID-19 pandemic has made it more difficult for graduates to enter the labour market. These consequences have primarily affected the 2019 cohort of first-cycle programme graduates. They have faced a higher risk of unemployment and earned less than graduates of previous years; fortunately, however, circumstances are returning to normal. The newest ELA data indicates that graduates of computer science are once again the most successful group on the job market; they command the highest salaries and are the most rarely affected by unemployment. The data also shows, however, that differences exist between graduates who specialise in the same fields. Students who have obtained the title of ‘engineer’ at technical universities are likely to earn more than others.

‘I’m very glad that the data of the latest edition of the ELA system has confirmed what we already knew: studying pays off! I hope that this year’s school leavers are well aware of that. When deciding your field of study, you should follow your interests; your passion and devotion will not only make your studies, but also your work easier,’ says Przemysław Czarnek, the Minister of Education and Science. ‘If you still don’t know which university or faculty to choose, ELA might help you. The system provides information on graduates’ earnings, the time needed for them to find jobs, and the percentage of graduates who are offered employment contracts immediately after graduation, by the fields in which they specialise. The data is reliable and will most certainly prove helpful for school leavers in making the right decision,’ adds the minister.

ELA – one of the top systems in the European Union

ELA presents information on the circumstances of graduates for five years following graduation. In 2020, for the first time in history, system users could monitor the full period of five years for the 2014 cohort. In 2021, the same is possible for the students who graduated in 2015. This means that we can now compare the circumstances of different cohorts over the span of the full five-year period.

‘New functionalities are added every year. ELA is considered one of the best systems in its class in the European Union. Until recently, it presented information on the circumstances of each cohort of graduates individually. Experts at OPI PIB have fitted the sixth edition of the system with a tool that allows users to compare the circumstances of graduates of different cohorts at corresponding stages of their careers quickly and easily. This new functionality has been available to everyone since 6 July 2021,’ says Dr.Jarosław Protasiewicz, the head of the National Information Processing Institute. ‘New solutions will help identify tendencies in the functioning of consecutive cohorts on the labour market, including, for example, determining changes in their circumstances following graduation – at the moment of “entering” the workforce. They will also illustrate the position of the “average” graduate,’ adds Dr. Protasiewicz.

Data gathered by ELA shows that, regardless of the cohort, graduates’ earnings in consecutive years following graduation have risen faster than the average in their places of residence.

‘Each year following graduation is characterised by specific values of the relative earnings rate in the monitoring period. These are highly similar between cohorts; for example, the average graduate of a long-cycle master’s degree programme earns between 60 and 65% of the average local remuneration in his/her first year following graduation, between 70 and 80% in the second year, and 106% after five years. A slight upward trend in the relative earnings rate for consecutive cohorts can be explained partially by the increasing share of graduates who gain professional experience during their studies. According to previous analyses based on ELA data, such people earn more than others,’ says Dr. Mikołaj Jasiński, a researcher at OPI PIB.

The growing risk of graduate unemployment during the COVID-19 pandemic

Low numbers of new hires and the closures of some industries as a result of the pandemic restrictions have created more difficult conditions for graduates entering the workforce. The first- and second-cycle programme graduates of 2019 faced a much higher risk of unemployment than those of previous years. The relative unemployment rate started growing in May 2020, and has remained higher than that of previous cohorts in the corresponding period (i.e. in consecutive months of the calendar year following graduation). The circumstances of long-cycle programme graduates are different: while the risk of unemployment increased slightly in July and August 2020, it was lower in November and December than in the same months in previous years. This is due primarily to the altered circumstances of medical doctors who, after obtaining their diplomas, were recruited to combat the pandemic under decisions issued by regional governors and the health minister. Such tasks have also been assigned to graduates who have not yet passed their professional examinations; they are considered doctors serving postgraduate internships on the basis of temporary medical licenses.

The economic circumstances of graduates are also reflected in relative earnings rates. In the first months of 2020, 2019 graduates’ earnings were comparable to those of previous years; since the onset of the pandemic, however, their relative earnings have fallen – a decline most pronounced among graduates of first-cycle programme. The least perceptible changes in the earnings trajectory were observed among long-cycle master’s degree programme graduates  –  primarily medical doctors. This is due to the special conditions under which this group is currently employed, including their COVID bonuses.

Computer scientists still earn the most

Each edition of ELA indicates that computer science graduates are the most successful group on the job market; they receive the highest salaries and are rarely affected by unemployment. The data also shows, however, that differences exist between graduates who specialise in the same fields — both in terms of earnings and risk of unemployment. The average earnings of computer science graduates are higher among those who gained work experience during their studies and those who majored in technical sciences. Although the nominal earnings of consecutive cohorts are rising, they remain stable when compared with the average. A computer science graduate who has professional experience earns one-and-a-half times more than the average in his/her place of residence. This ratio is slightly higher among ‘master engineers’.

ELA is a rapidly developing system. From autumn 2021, the public will be able to view the professional and scientific achievements of Polish doctoral students and PhD holders. This new functionality will enable all users to access data, which asserts that the doctoral path is most frequently traversed by graduates of exact and natural sciences, and least frequently by those of the social sciences. Over the last five years, the most popular fields among doctoral students were physics, molecular biology, nanostructure engineering, application of physics in biology and medicine, technical physics, philosophy, and canon law.

The Polish Graduate Tracking System (ELA) is developed and maintained by OPI PIB for the Ministry of Education and Science. The development plans for the system include collecting data on students’ professional activity, and monitoring the professional and academic achievements of doctoral students and PhD holders. The system is innovative and user-friendly. It generates reports, rankings and infographics to suit users’ needs. A free-of-charge mobile application is also available. The sixth edition of the system was launched in July 2021. The system is accessible to the public at www.ela.nauka.gov.pl.