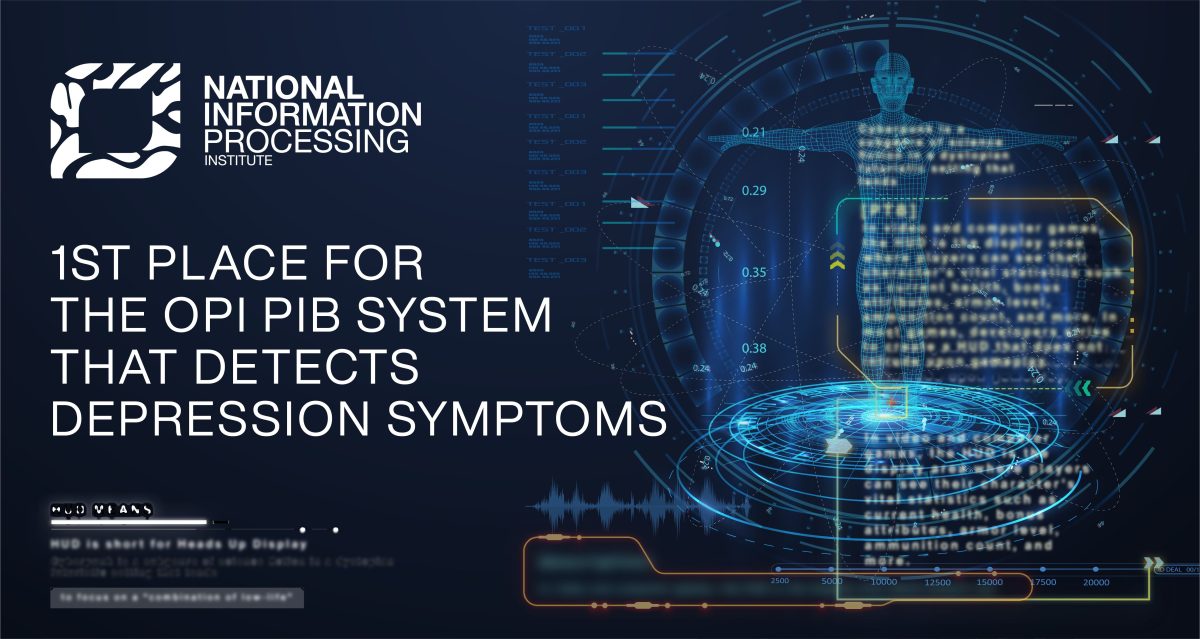 Experts at the National Information Processing Institute (OPI PIB) develop systems that are used in medical diagnostics. Since successfully implementing the eRADS platform, which assists radiologists in diagnosing prostate cancer, the specialists have focused their efforts on a system that detects depression symptoms on social media content. The new tool was awarded first prize in Detecting Signs of Depression from Social Media Text—a competition organised as part of the Second Workshop on Language Technology for Equality, Diversity, Inclusion (LT-EDI-2022).

Artificial intelligence in the fight against depression

According to the World Health Organization, depression affects approximately 322 million people globally. Rapid diagnosis and early treatment considerably improve patients’ quality of life, and, in some cases, even saves lives. This has motivated IT experts to produce solutions that rapidly detect depression symptoms by analysing text posted on social media, for example.

‘I am proud of our team at the Laboratory of Intelligent Information Systems, who claimed first prize at “Detecting Signs of Depression from Social Media Text”. The initiative attracted fierce competition from across the world. But, in the end, our project was victorious,’ says Dr Jarosław Protasiewicz, Head of the National Information Processing Institute. ‘We continually strive to improve our tool to combat depression. These efforts align with our strategy, which focuses on the development of AI tools that can be applied in medicine and healthcare,’ adds Dr Protasiewicz.

The competition victory is the latest in a series of successes for the Laboratory of Intelligent Information Systems, which has been engaged in various natural language processing projects for years. The laboratory created Annobot: a platform that assists in the development of systems that detect emotions in text. This innovative tool is used to tag and create datasets via conversations with a chatbot. The heart of the platform is Annobot Core, a server application that integrates all other modules. Two modules are responsible for tagging texts. The first is integrated with the Facebook Messenger application; the second, Annobot chat, isan instant messaging service developed by experts at OPI PIB. The remaining elements include an administrative panel, a machine learning module and a database. The tool is capable of detecting six fundamental human emotions.

‘Our solution is based on RoBERTa neural language models. In addition to using a standard model for the English language, we have also trained our own model, which relies on our own dataset. It includes about 400,000 posts, which mainly concern depression, anxiety disorders, and suicidal thoughts. We have found that combining the two models yields the best results,’ says Rafał Poświata, the main architect of the system and a research and technical specialist at OPI PIB.

Experts at OPI PIB have long recognised the potential of neural language models. To explore the subject more deeply, the institute established the Laboratory of Natural Language Processing (LIL), where IT specialists develop intelligent tools that extract knowledge from large text and internet corpora. The laboratory designed and implemented the Uniform Antiplagiarism System (JSA), which is used by all thesis supervisors in Poland. The innovativeness and complexity of neural language models have also attracted the attention of experts at other OPI PIB laboratories. Compelling and innovative projects are also being conducted by the Laboratory of Intelligent Information Systems (LISI), the largest laboratory of the institute. The LISI team developed the Polish RoBERTa large model, which was trained on Poland’s largest text corpus.  In 2021, the laboratory released two new models: Polish RoBERTa base v2 and GPT-2. The latter was designed for tasks related to the generation of texts in the Polish language. The tool that detects depression symptoms was also developed at LISI. The competition results are available at: https://competitions.codalab.org/competitions/36410#learn_the_details-results.
A poster session, at which all systems submitted for the competition are presented, will be held on 27 May, 2022 in Dublin, Ireland.