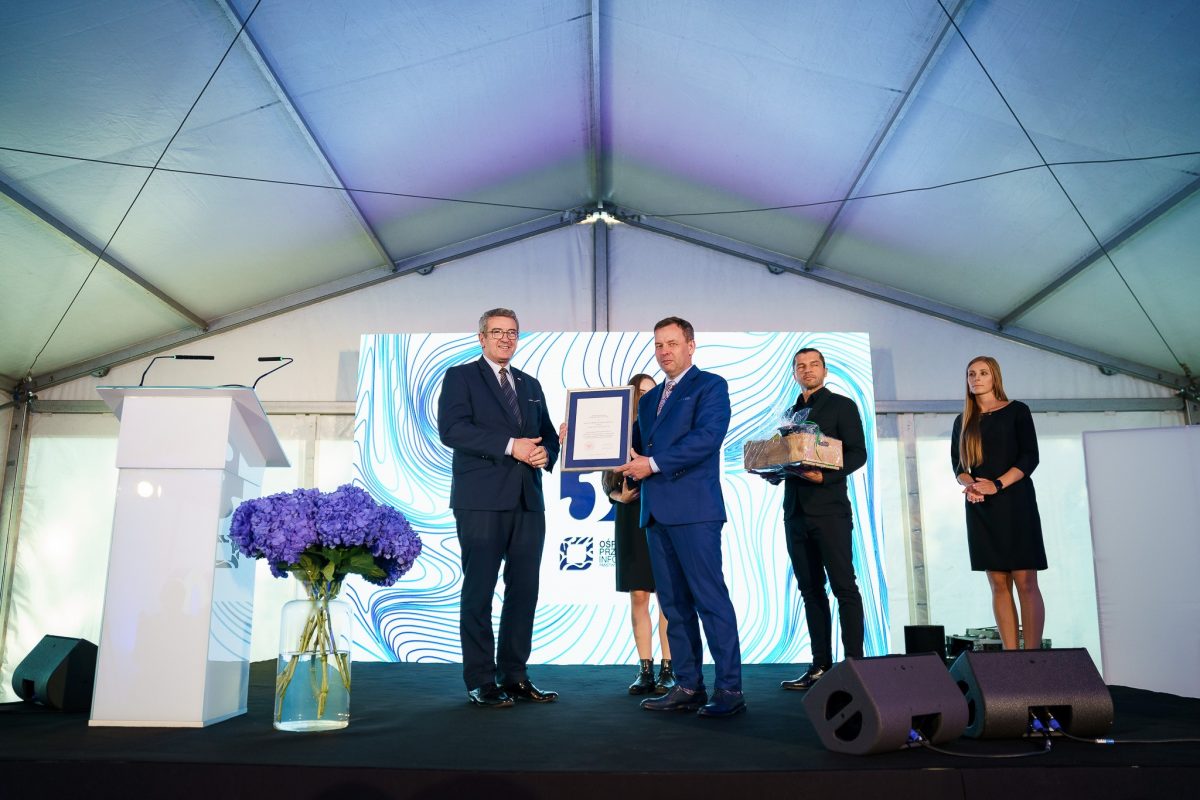 On 7th October, 2021, the National Information Processing Institute (OPI PIB) celebrated its 30th anniversary. A special event was organised to mark the occasion. The attendees included Secretary of State in the Ministry of Education and Science Wojciech Murdzek and representatives of the top scientific and academic institutions and enterprises that work in modern technology. During the event, Dr Jarosław Protasiewicz, Head of OPI PIB, announced the construction of the Artificial Intelligence Research Centre and presented its design. Construction is due to be completed in 2023.

‘In order to meet the ambitious objectives of OPI PIB, we must invest in the infrastructure. The Artificial Intelligence Research Centre will be located in a modern, multi-storey building. I hope that we will all meet again in 2023 to celebrate its grand opening,‘ said Dr Protasiewicz.

The new Artificial Intelligence Research Centre is going to be built in the Mokotów district of Warsaw, adjacent to the current headquarters of OPI PIB. If artificial intelligence technologies are to continue making rapid strides, they require modern infrastructure. This will also enable OPI PIB to strengthen its scientific potential. The institute actively supports ‘The Policy on Artificial Intelligence Development in Poland in 2019-2027‘. Artificial intelligence plays an increasingly major role in social and economic development; the achievements of the Polish scientific community will enable this development to be accelerated greatly. ‘We realise that modern facilities and innovative IT systems alone are not enough to boost AI development; more than anything else, we need highly qualified experts, like the ones who work at OPI PIB. They are passionate specialists who are unafraid of experimenting with new approaches. They are innovators who dare to look far into the future. Without them, our achievements would not have been possible,‘ added Dr Protasiewicz.

Dr Protasiewicz also underlined that the research conducted by OPI PIB relies on interdisciplinarity. It is performed across six laboratories that bring together professionals from many domains; in addition to IT experts, the institute also employs economists, sociologists, lawyers, statisticians, and psychologists. This convergence of approaches is conducive to in-depth analysis of research issues, and serves as a driving force for innovation. The key areas of research conducted at OPI PIB include machine learning and natural language processing algorithms, sentiment analysis, neural networks, the discovery of knowledge from text data, human-computer interaction, virtual reality, computer‑assisted decision-making systems, and artificial intelligence.

Wojciech Murdzek, Secretary of State in the Ministry of Education and Science, congratulated the management and employees of OPI PIB on the institute’s 30th anniversary. Since its early days, the institute has played a key role in the development of IT systems and software for the science and higher education sectors. The results of its research and analyses on the R&D sector are used as tools to support decision-making. Minister Murdzek thanked the staff of OPI PIB for their help in combatting the COVID-19 pandemic. In February 2021, in only five days, specialists at OPI PIB succeeded in implementing a tool that enabled academic teachers and others who delivered classes at Polish universities to book their vaccinations. In total, over 70,000 people registered using the system.

Minister Murdzek also emphasised the role of OPI PIB systems in Polish science. The institute is responsible for the development of the POL-on Integrated System of Information on Science and Higher Education, which has proved popular among the academic community. It comprises 40 modules and is, data-wise, one of the largest public systems in Poland. Other systems and tools developed by OPI PIB include the Uniform Antiplagiarism System (JSA), the Integrated System of Services for Science (ZSUN/OSF), the Polish Scientific Bibliography (PBN), RAD-on, NAVOICA, and the Polish Graduate Tracking System (ELA). ELA tracks the economic circumstances of university graduates for five years following graduation, and information on the circumstances of undergraduate students and PhD graduates. Additionally, experts at OPI PIB have developed an application of the System for Evaluation of Scientific Achievements (SEDN), which facilitates the presentation and evaluation of the achievements of scientific units in Poland. SEDN will be used in the forthcoming evaluation of higher education institutions. Evaluated units will be assigned to scientific categories, which will determine their funding conditions and their right to award academic degrees.

Other speakers at the anniversary meeting included Prof Tomasz Jasiński, who serves as the Head of the OPI PIB Scientific Council, as well as current and former employees of the institute.